A single model must be defined in each Simulx project. This model is used both in Exploration and Simulation. Loading or reloading a model deletes all definition elements to avoid incompatibilities between previously defined elements and the new model.

This section contains the structural model. All variables of the model can be defined as outputs of the simulation.

Details on the syntax to define the structural model is here.

This section can include the definition of random variables in a block DEFINITION:, such as a random event or a variable with residual error.

If the model considers the inter-individual variability, then definitions of models for individual parameters are in [LONGITUDINAL]. The inputs of [INDIVIDUAL] are population parameters and covariates involved in covariate effects.

Example: Parameters Tlag, ka, V and Cl are described with lognormal distributions, effects of covariates SEX and logtAGE are included on Tlag and Cl, respectively, and there is a correlation between eta_V and eta_Cl:

Note that in Simulx it is not possible to define covariates as distributions within the block [COVARIATE] with a section DEFINITION:. However, the covariate distributions can be defined in the tab Definition in the interface of Simulx.

Several buttons are available on the top of the page to load or modify a model:

Loading or updating a model with the buttons “Browse”, “Load from library” or “Reload” deletes all definition elements to avoid incompatibilities with previously defined elements and the new model. 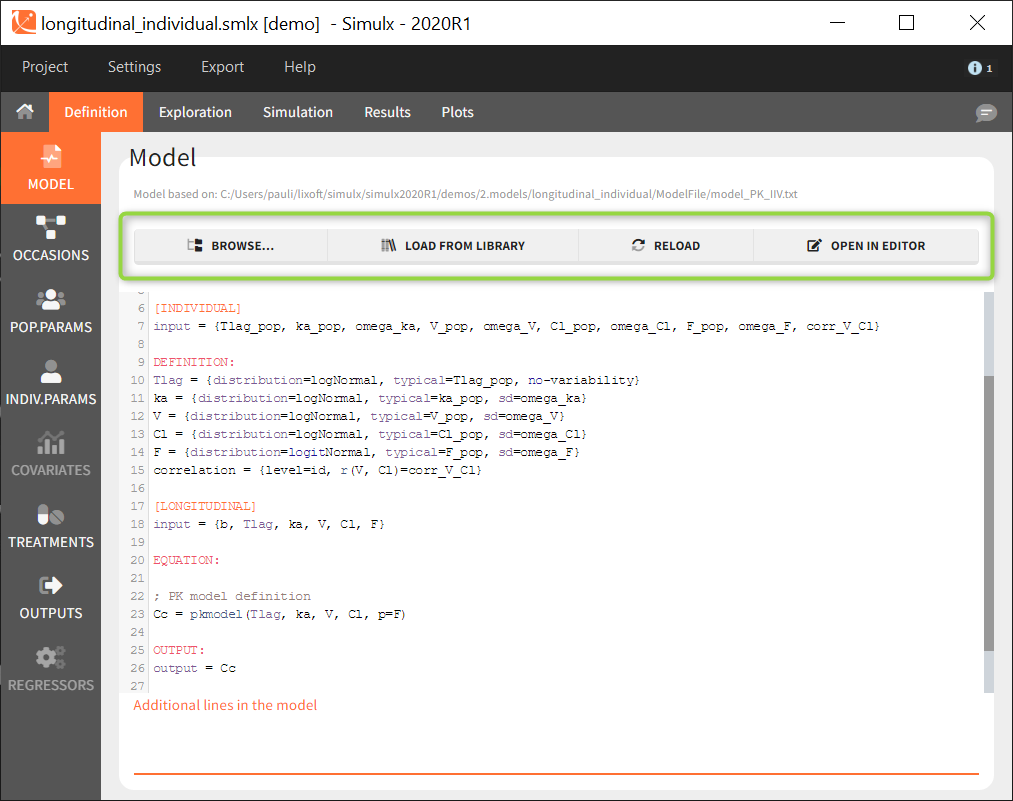 When importing a model from Monolix, the model that appears in the interface of Monolix comes from two sources:

Warning: When opening a model in the editor with “Open in editor”, only the new structural model file is opened for modifications. If this model is changed and reloaded, it will replace the two model sources mentioned above. It means that the [INDIVIDUAL] and [COVARIATE] blocks are removed. To keep these blocks in the modified model, they have to be pasted in the file together with the [LONGITUDINAL] block.

Below a model definition, there is a field to write additional lines, which are included “on the fly” in the model. This is convenient for example to use variables for simulations that are not defined in the Mlxtran model code, such as the AUC, a change from baseline, or the survival function (see example below). The model file itself is not modified, the additional lines are saved in the .smlx file.

This function is available also with lixoftConnectors functions: setAddLines() and getAddLines(), see here for more details.

Warning: When using “import from Monolix”, “additional lines” fields can (sometimes) be unavailable. In this case, open the Monolix project in Monolix and use “Export to Simulx”. This problem has been fixed in the 2021R1 version. 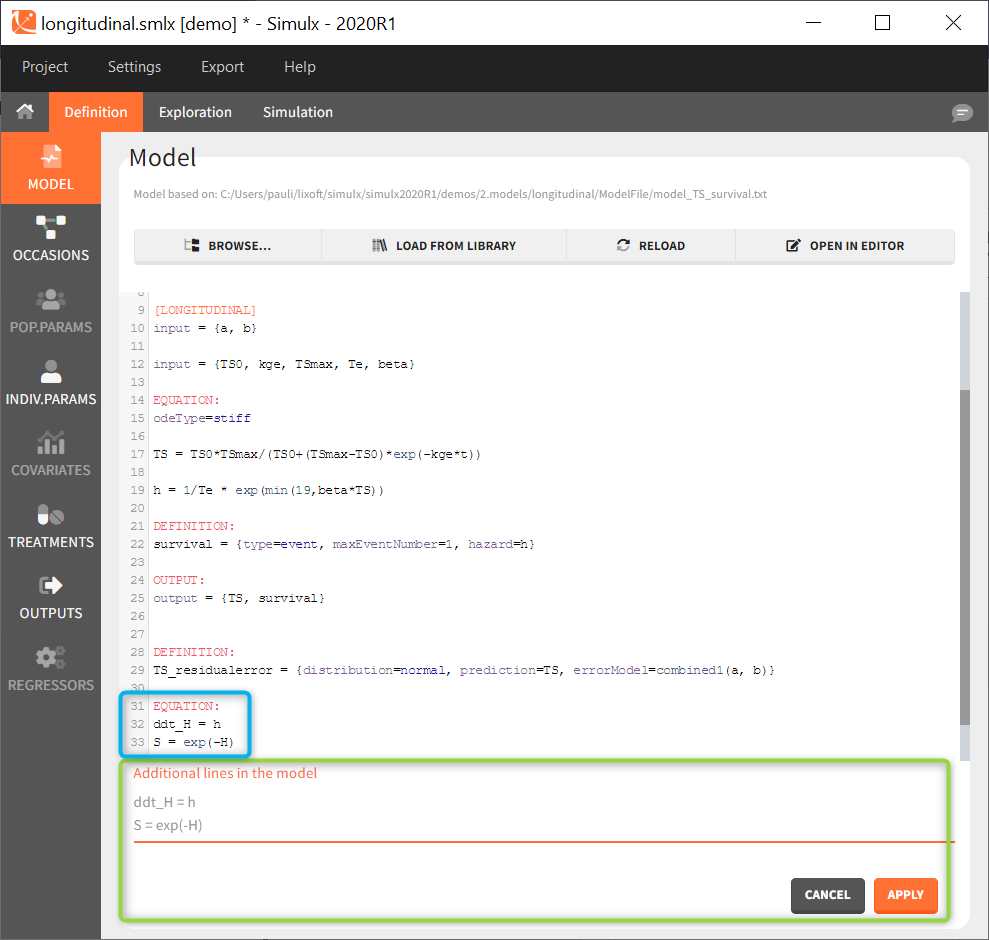 In the example below, a oral absortion route in added to the demo TMDD_exploration.smlx, which originally had only iv: 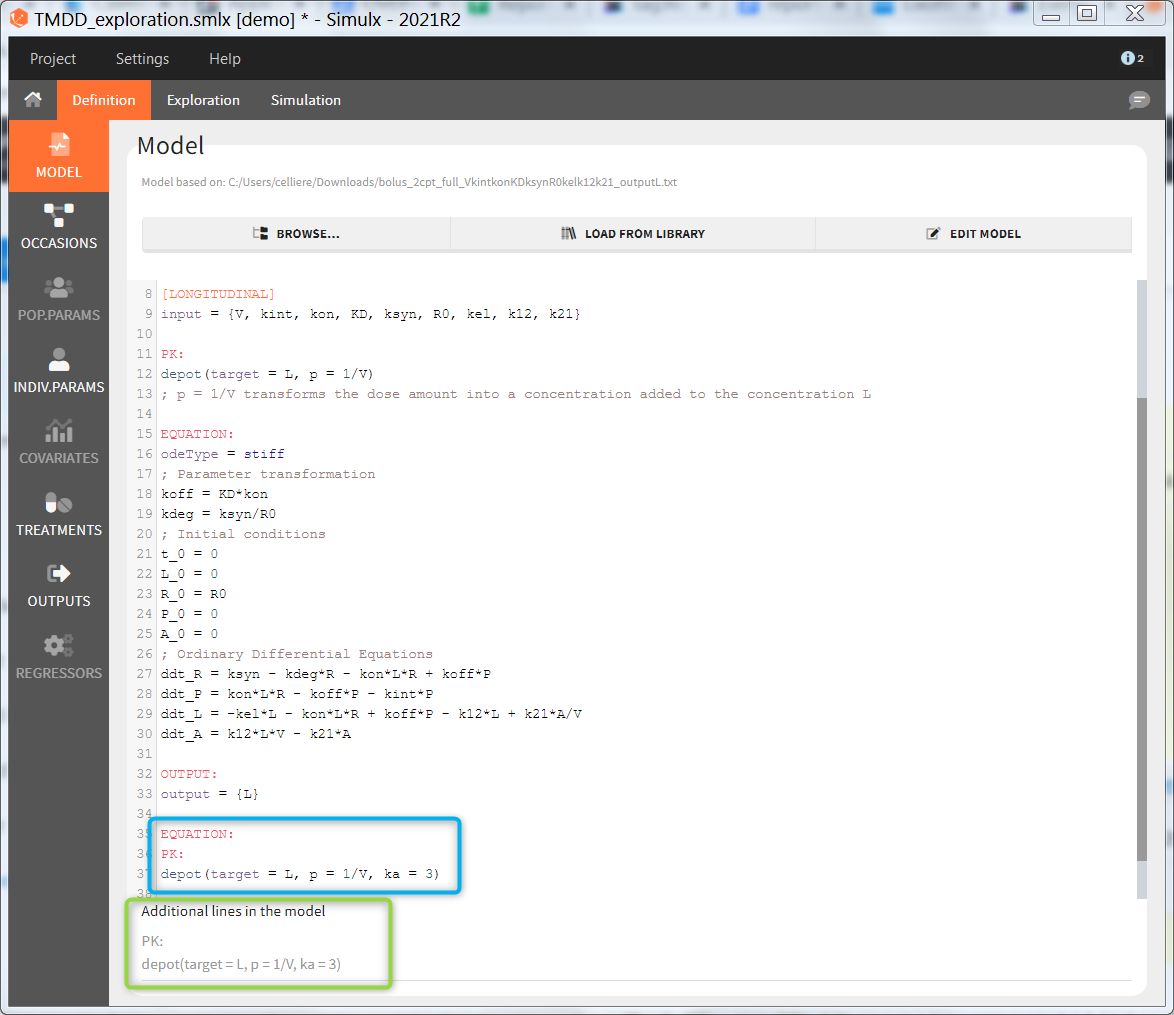