Import a project from Monolix

2. A typical simulation workflow with a project imported from Monolix

Importing a project from Monolix creates a Simulx project with all elements that could be useful for simulating the model automatically generated in the Definition tab: 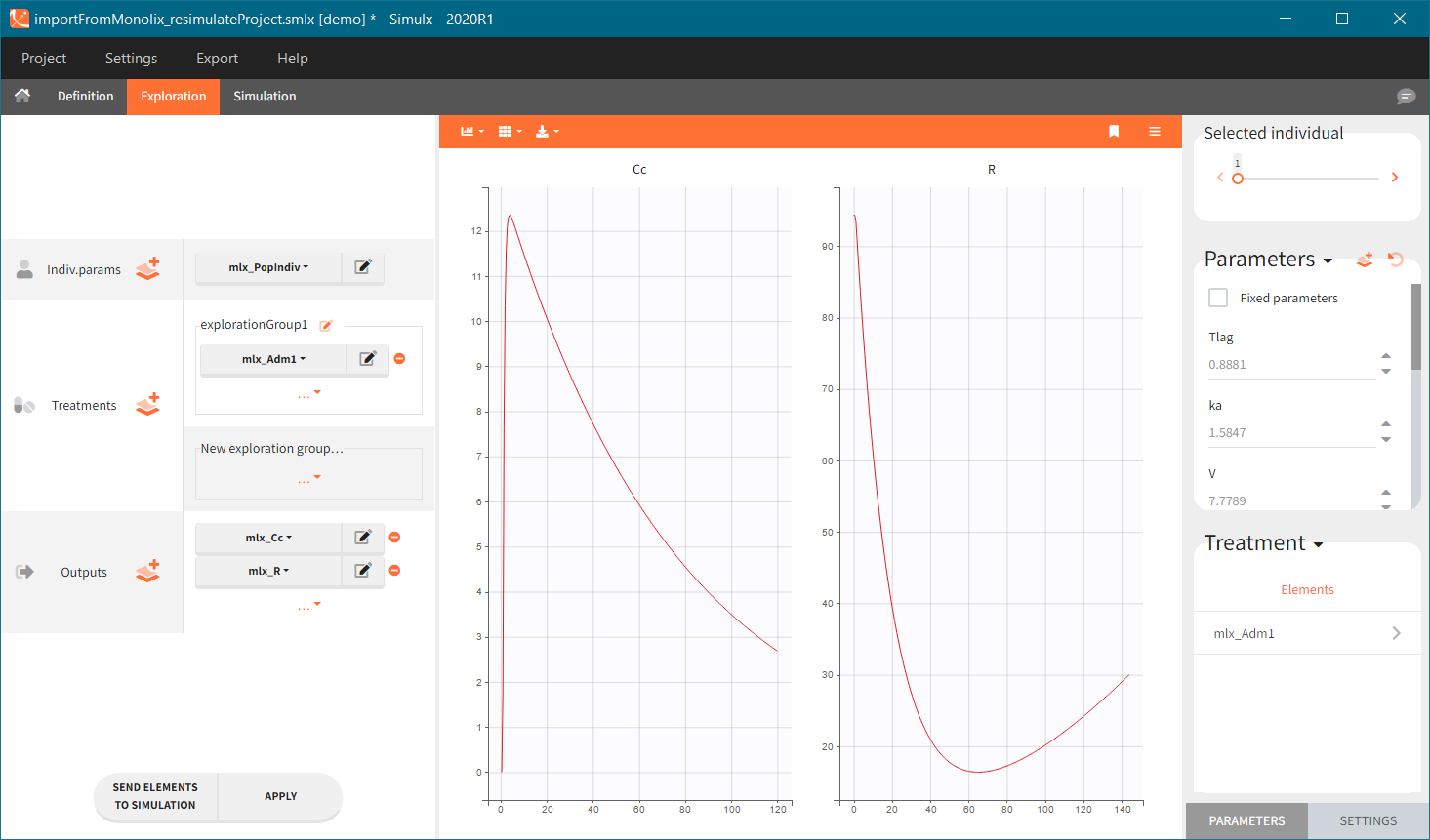 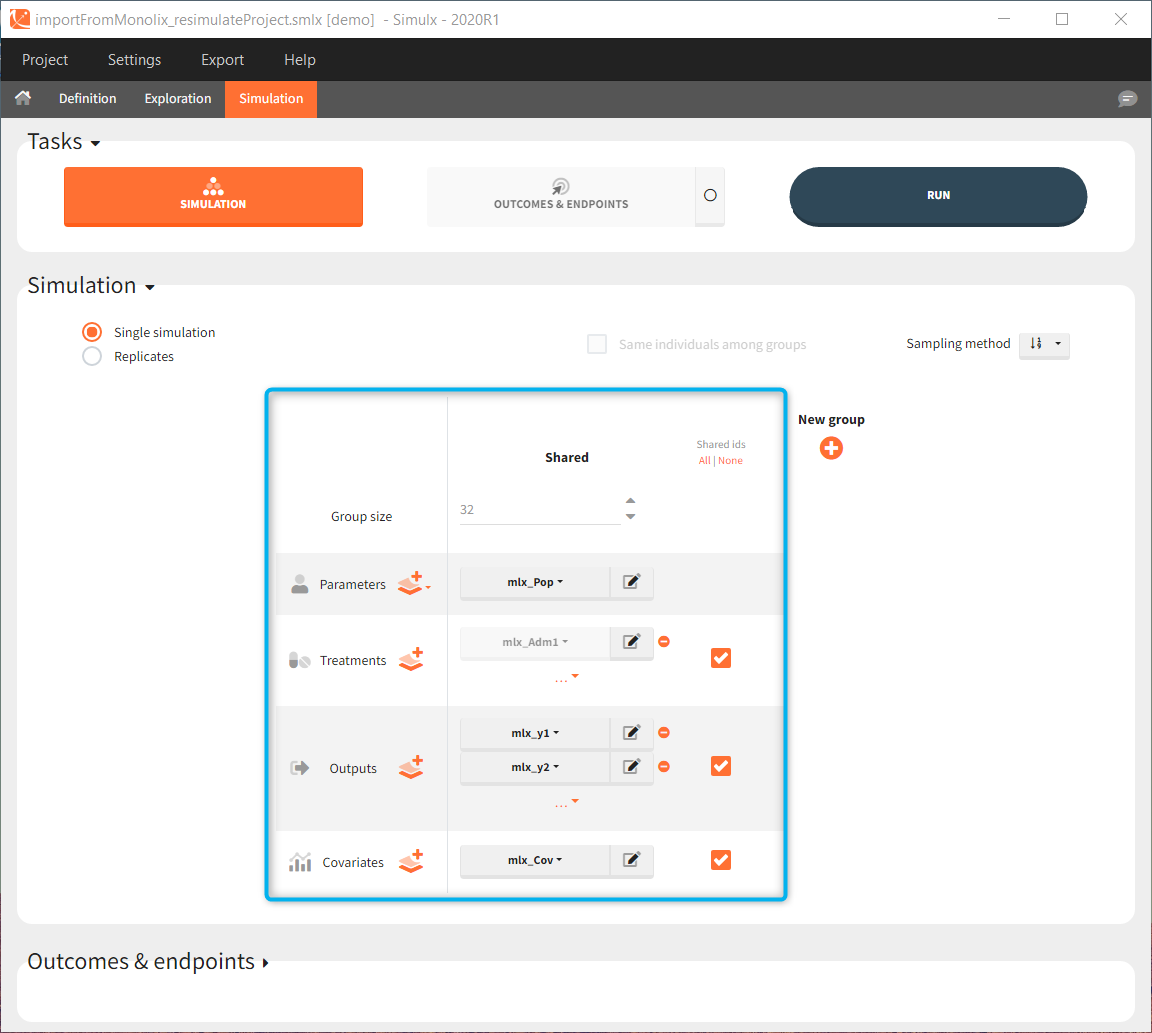 A typical simulation workflow with a project imported from Monolix

The projects shown here are all available as demo projects in the interface “1.overview – importFromMonolix_xxx.smlx”: 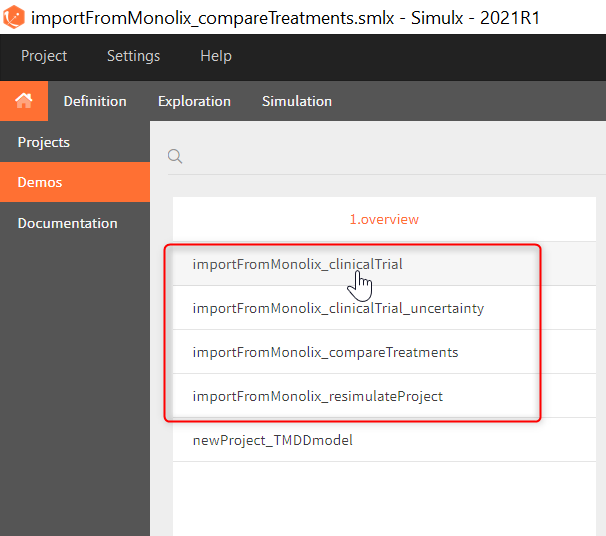 This example is based on a PK-PD model for Warfarin developed and estimated in Monolix. The Warfarin dataset contains concentration and PCA(%) measurements for 32 individuals, who received different oral doses of the drug. Firstly, the goal of the Simulx project is to use the information from the Monolix project to test the efficacy and safety conditions for different treatments. Secondly, to simulate clinical trials and compare various strategies. Simulations should answer the following questions:

Model:
The PK model includes an administration with a first order absorption and a lag time. It has one compartment and a linear elimination. The PD model is an indirect turnover model with inhibition of the production. All individual parameters have log-normal distribution besides the Imax parameter, which is logitNormally distributed. In addition, the log-transformed scaled weight covariate explains intra-individual variability of the volume, age covariate has an effect on the clearance and sex covariate on the baseline response. Finally, the combined-1 error model is used in the observation model of the concentration, and the constant model of the response.

The Monolix project imported in Simulx for this example can be downloaded here. To import the Monolix project, unzip the folder and import the .mlxtran file. After importing a project from Monolix, the task buttons “simulation” and “run” in the Simulation tab re-simulate the project. After that, plots and results are generated automatically. Results are tables for outputs and individual parameters and plots display model observations as individual outputs and distributions. 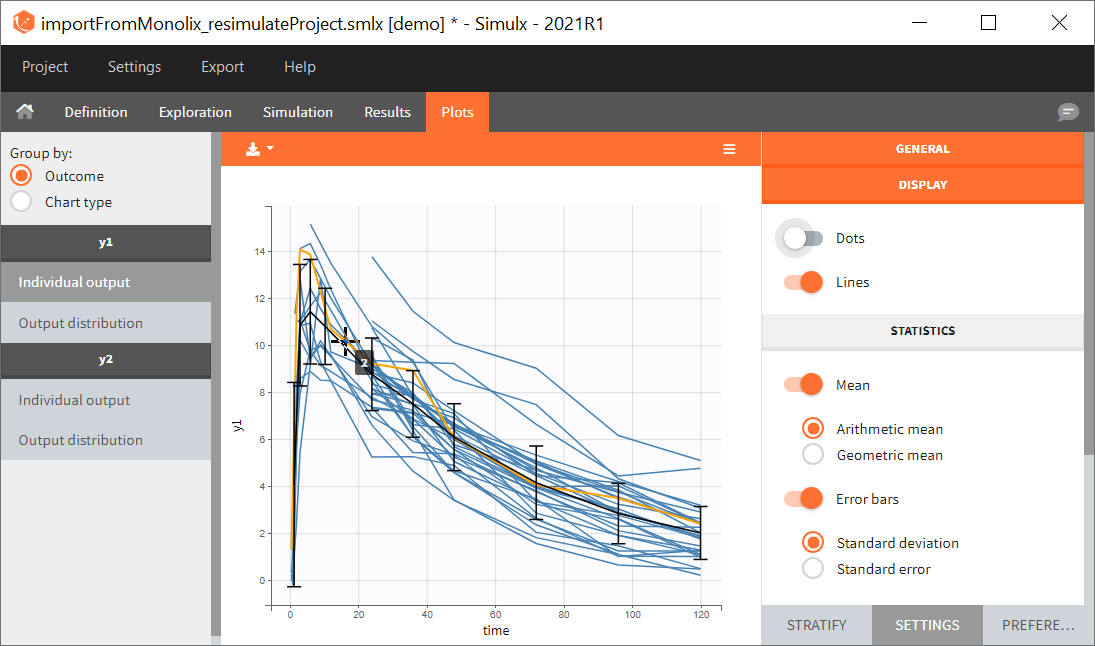 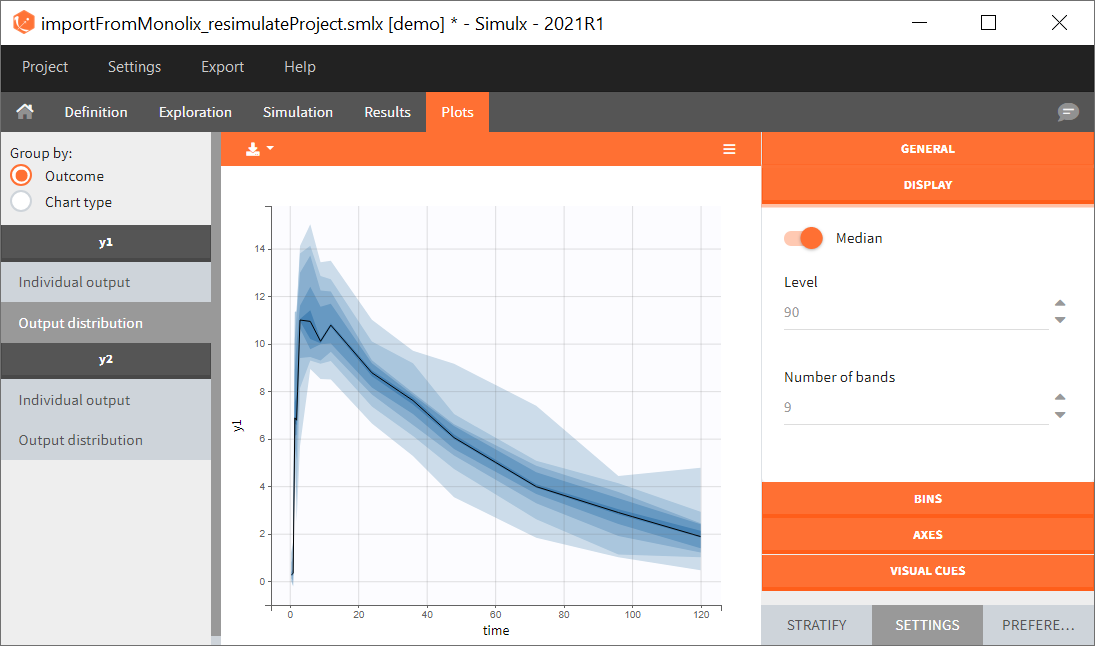 Exploration tab simulates a typical individual. After importing a project from Monolix, individual parameters equal population parameters estimated by Monolix or their initial estimates. Using several exploration groups allows to compare different treatments. The goal of this example is to test how many days of a “loading dose” are neccesary to reach a steady state without a peak of the concentration. Dosing regimens are:

“Loading dose” treatments are of manual types (with time of a dose and amount), but multi-dose elements are of regular types. The latter is an easy way to specify a treatment period, inter-dose interval and number of doses. Treatments combination takes place directly in the exploration tab. 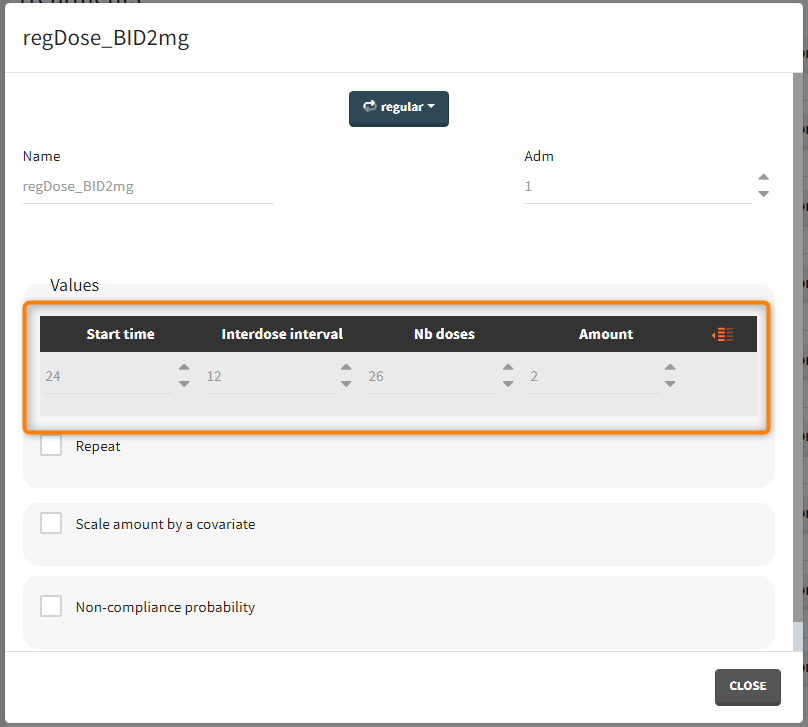 As outputs we selected the concentration prediction Cc and the response prediction R on a regular time grid over the whole treatment period (t = 0:1:336) . The plot displays one subplot per output, and all exploration groups (=dosing regimen) together on each subplot. Dosing regimen (and parameters) can be interactively explored and predictions are updated on-the-fly for all groups to help you find which exact regimen should be compared in the next step (simulation of a whole population). 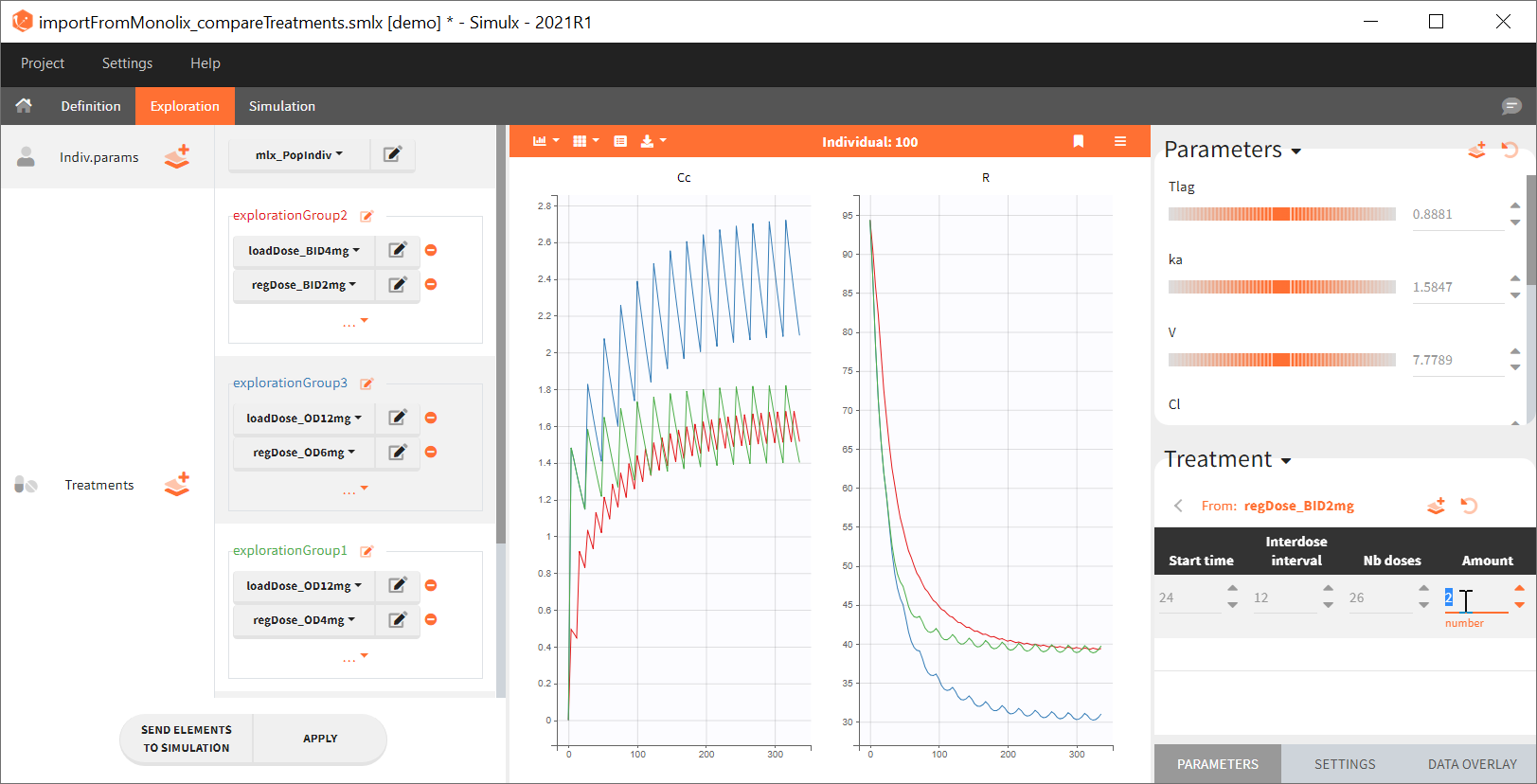 2. Treatment comparison: percentage of individuals in the target

In the simulation tab, the button “plus” adds a new group and “arrows” move the treatment element from the shared section to the group specific section (green frames). Each group has a specific combination of treatments (blue frame). In addition, the option “same individuals among groups” removes the effect of intra-individual variability between individuals (red frame). As a consequence, the differences between groups are only due to the treatment and simulation can use a smaller number of individuals. 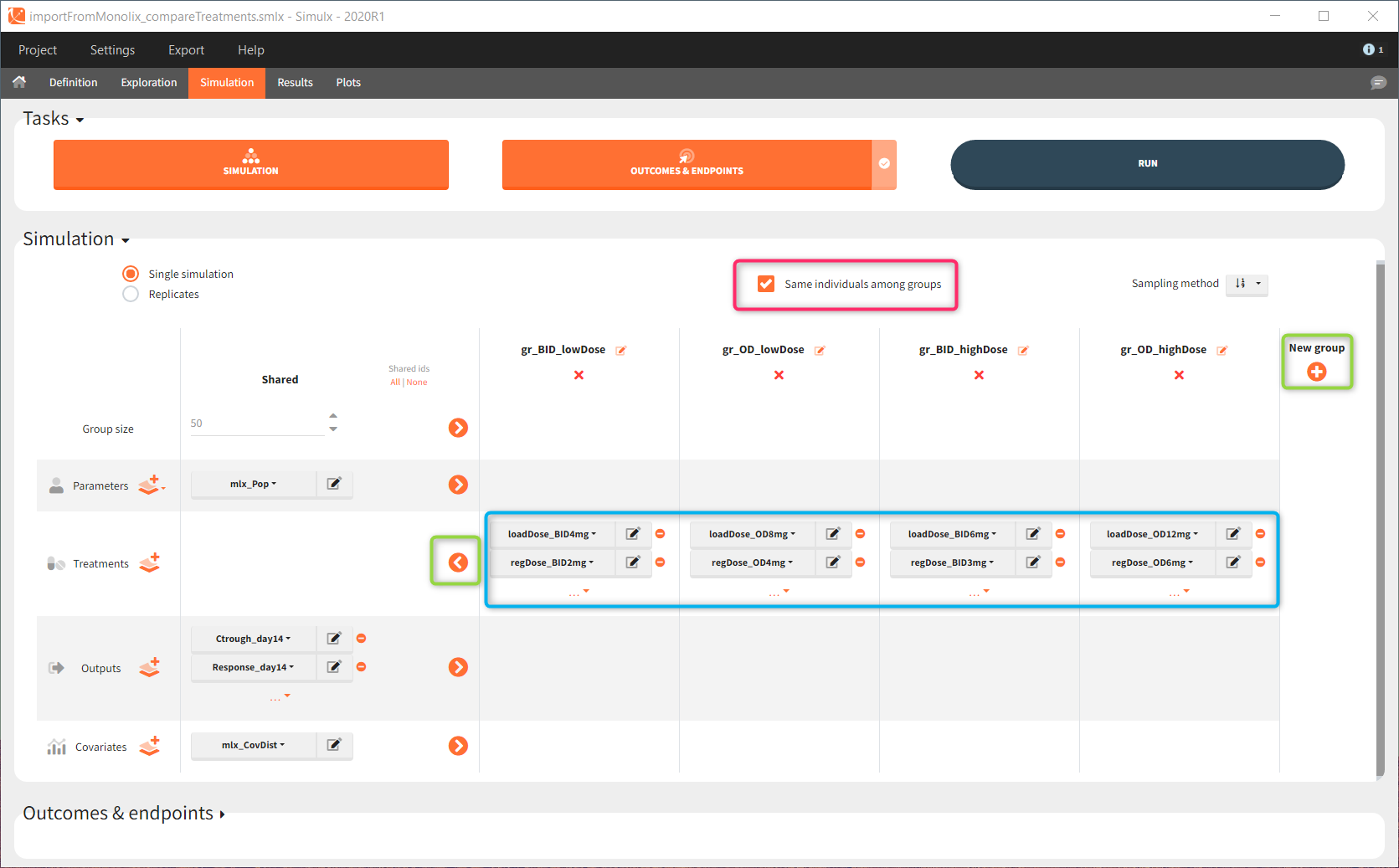 The comparison between groups is in terms of the percentage of individuals in the efficacy and safety target:

Simulx treats these types of criteria as binary (true/false) outcomes. It is a post-processing of simulation outputs, which takes place in the  outcome&endpoint section of the Simulation tab. Definition of new outcomes includes selecting an output computed in the simulation scenario and post-processing methods. 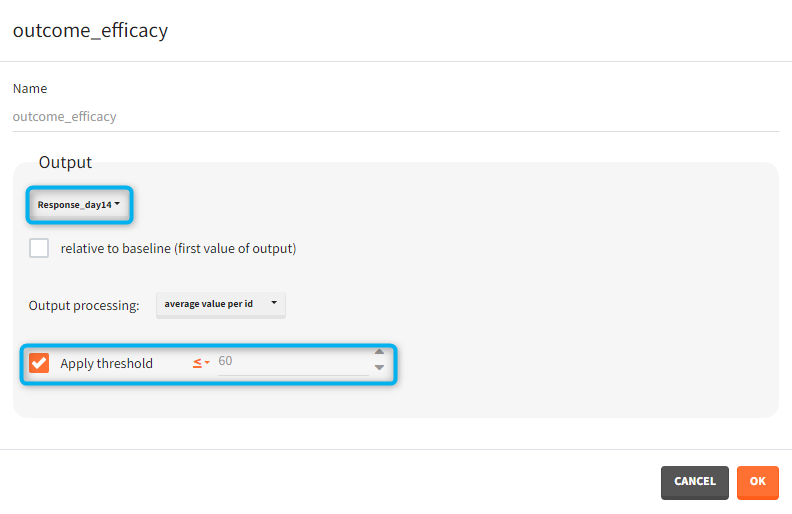 In addition, outcomes can be combined together (blue frame below), and an endpoint summarizes “true” outcomes over all individuals in groups.

Similarly to the task button “Simulation”, which runs the simulation, the “Outcomes & endpoint” button calculates the efficacy and safety criteria and the number of individuals in the target in this example. Moreover, running the task generates automatically the results in the “endpoint” section and plots for outcomes distributions. 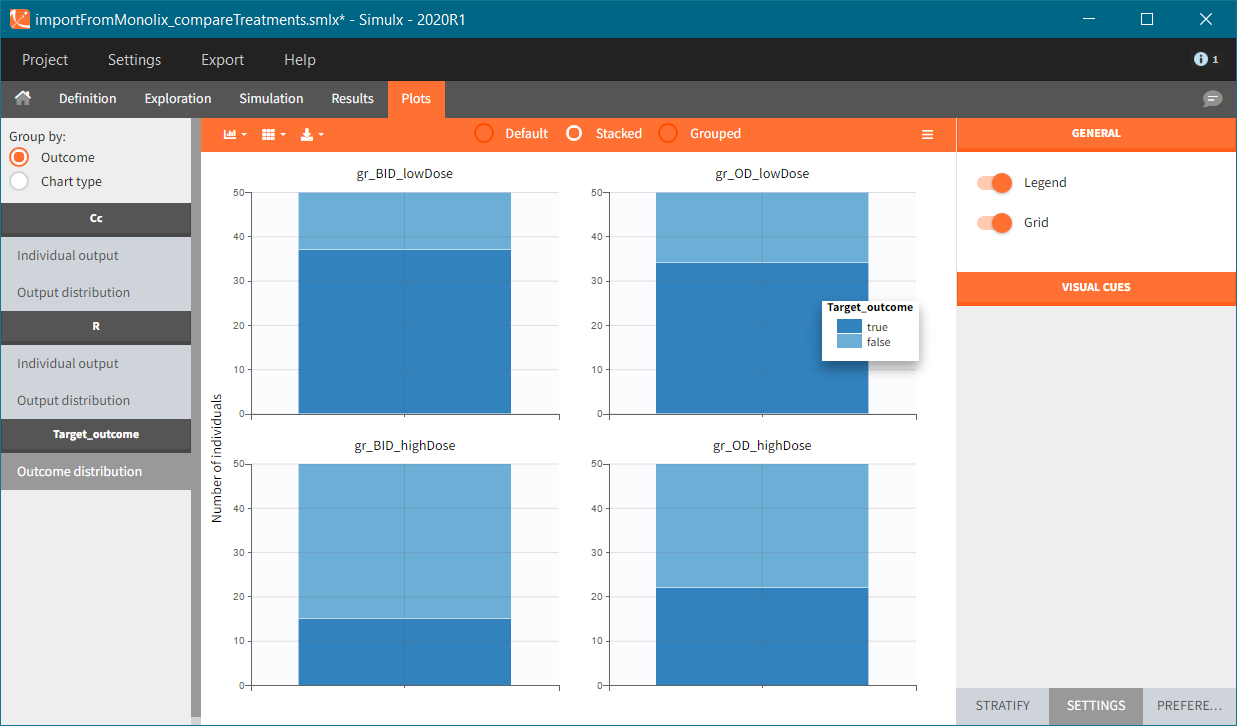 In this example, the outcome distribution compares the number of individuals in the target between groups. The highest number of “true” outcomes is in the group with the low level dose twice a day (gr_BID_lowDose). Failure to satisfy the safety criteria by the two groups with the high dose level causes large numbers of “false” outcomes. In fact, the endpoint results show that for these two groups less than half of the individuals have Ctrough below the safety threshold (blue frame below). 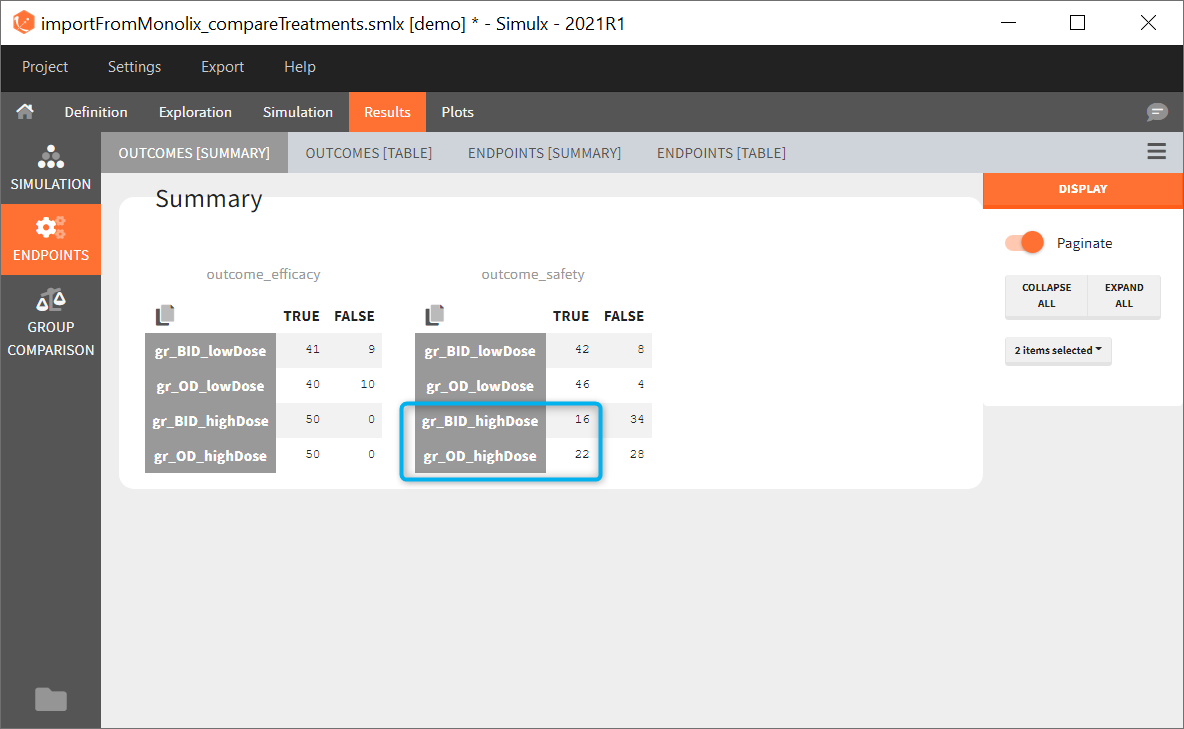 3. Clinical trial simulation and uncertainty of the results

The previous step shows that the high dose level violates the safety criteria in more than 50% of individuals. Therefore, the simulation of a clinical trial focuses only on one dose level with the BID and OD administration.

The goal is to analyse the effect of uncertainties due to variability between individuals, measurement errors and number of individuals in a trial.

Simulation scenario has four groups with different dosing regimens (BID or OD) and different group sizes (30 or 100). Outputs are model observations at the end of the treatment. Most importantly, the option “replicates” simulates the scenario several times (green frames). As a result, the endpoints summarize the outcomes not only over the groups but also over the replicates.

[Starting from the demo project “1.overview – compareTreatments.smlx”, change number of replicates to 100, and add two groups: one with treatment as for GR_BID, other as GR_OD. Move “number of ids” as group specific, and set N=30 for one BID-OD pair and N=100 for the other.  Change names to indicate group sizes.] 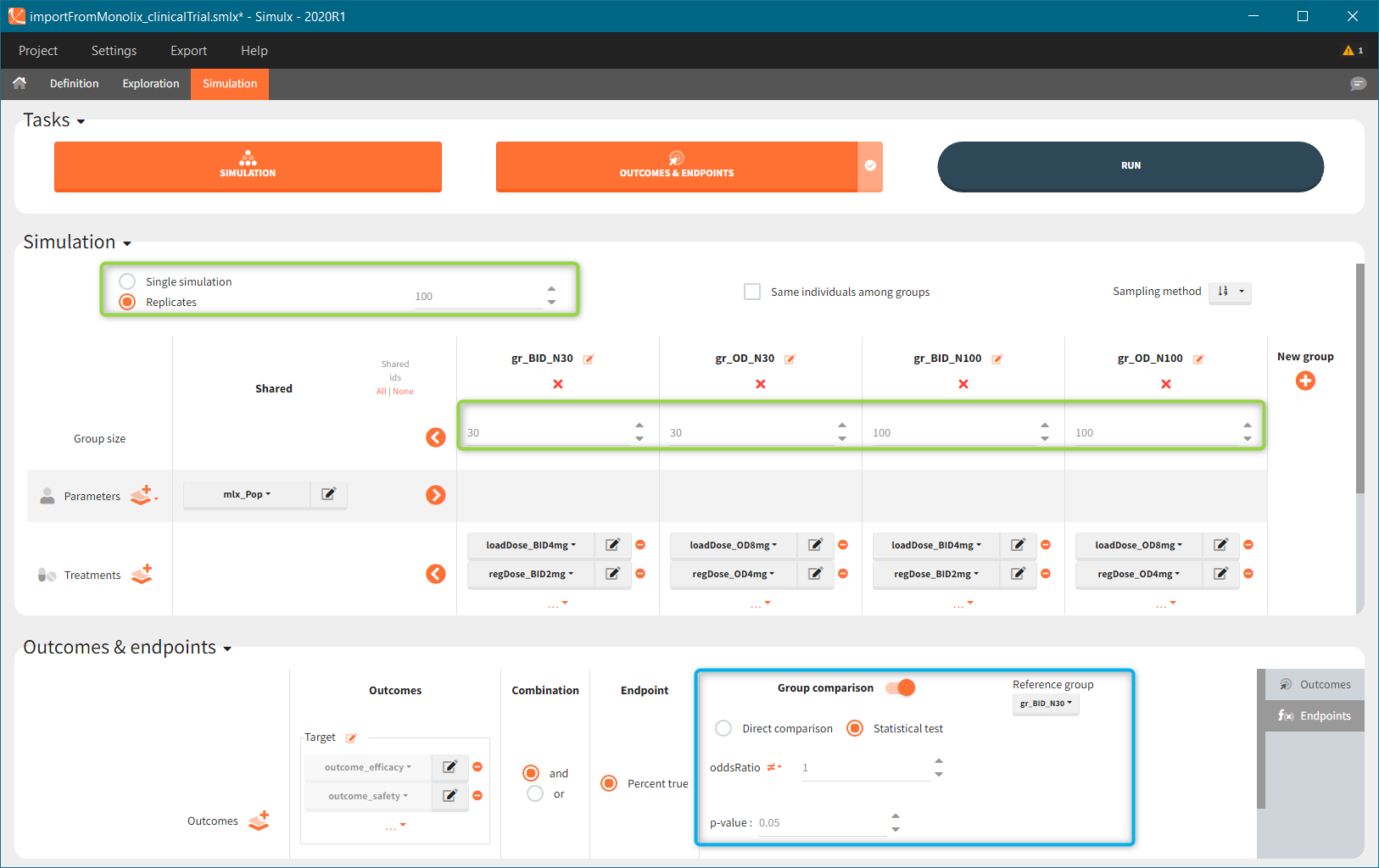 After running both tasks, plots display the endpoint distribution as a box plot with the mean value (dashed line) and standard deviations for each group. As expected, the uncertainty is lower for trial with more individuals. However, the mean values remain at similar levels. 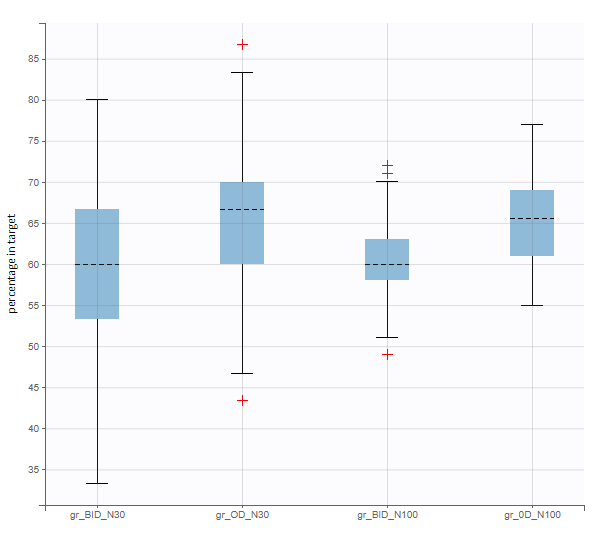 “Group comparison” option in the Outcomes&endpoints section compares the endpoints values across groups (blue frame). Selecting different reference groups and hypothesis (through the odds ratio) allows to change the objectives. Moreover, calculation of new outcomes or endpoints do not require re-running a simulation because the post-processing is a separate task.

The statistical test checks if any of the dosing regimens, BID or OD, is better than the other. Firstly, in the smaller trial so the gr_BID_N30 group is the reference and the hypothesis states that the odds ratio is different from one. For each replicate, if the p-value is lower than selected 0.05, then a test group (GR_OD_N30) is a “success”. Results summary in the “group comparison” section shows that only 5% of the test group replicates are successful (left image below), which suggests that OD dosing regimen is not significantly better than BID. Larger trial size might give different results. Change reference group to gr_BID_N100 and re-run the outcomes & endpoints task. Percentage of successful replicates for gr_OD_N100 is higher, 8%, (right image below), but it is comparable to the previous result. 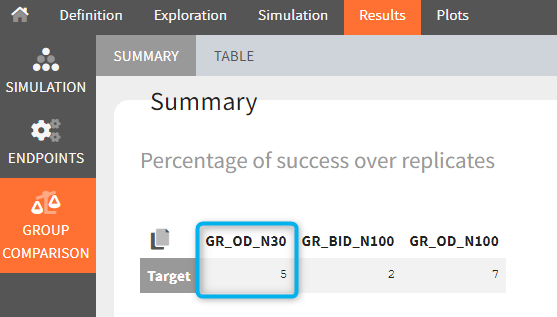 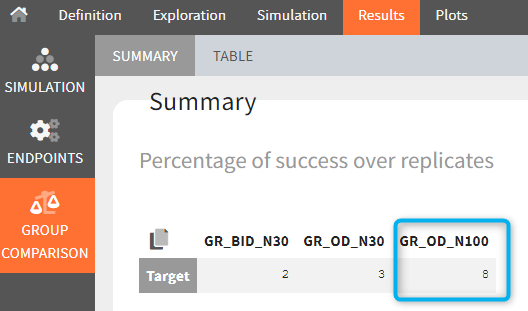 4. Propagation of parameter uncertainty to the predictions

In the previous step, we replicated the study 100 times to check the impact of sampling different individuals on the endpoint, and on the power of the study. For all these replicates, we sampled individuals using the same population parameters (so same typical values and deviations of random effects). 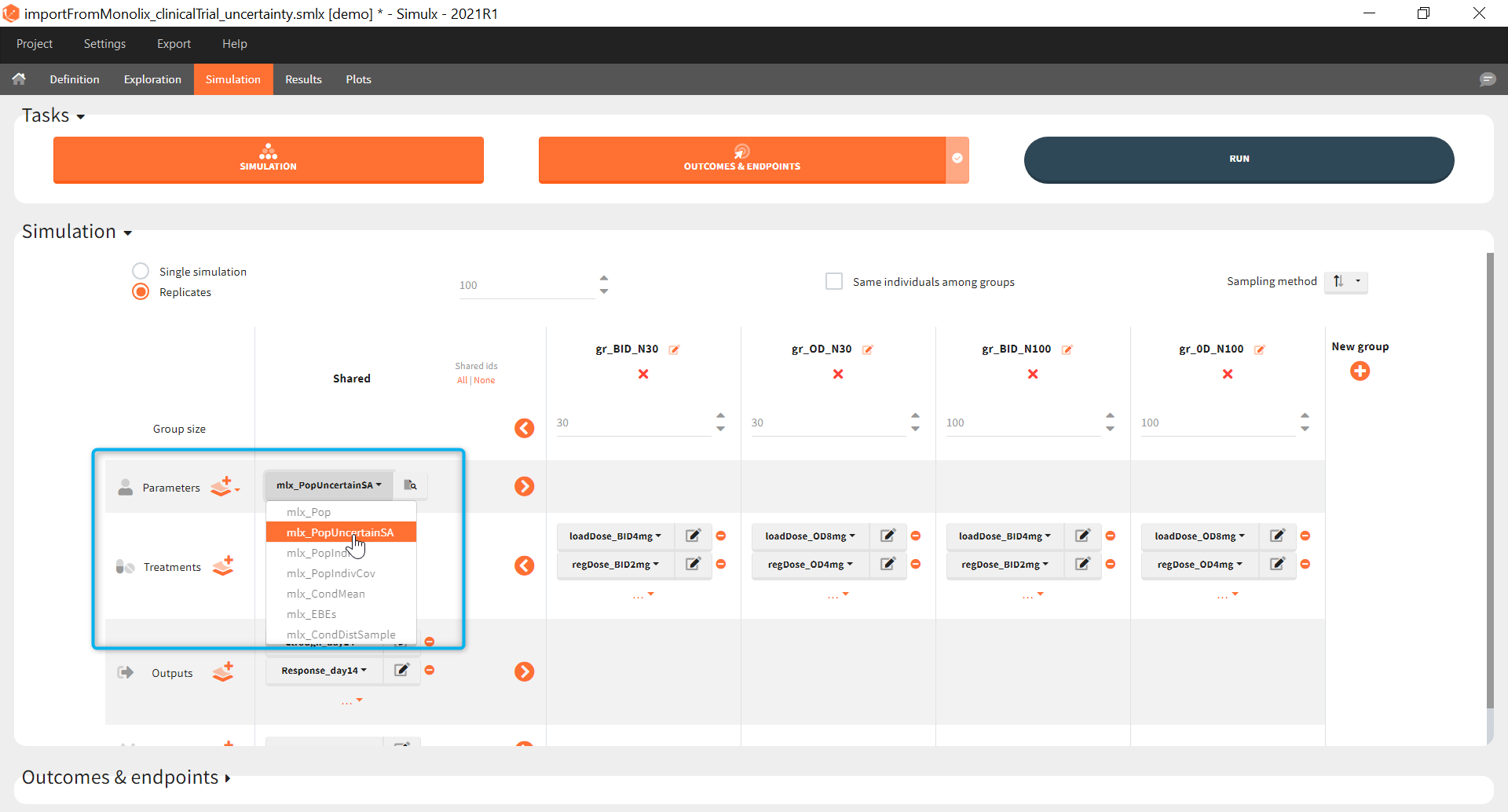 When running again simulation and outcomes with this population parameter element, we obtain a higher uncertainty on the endpoint than in step 3, since now we observe in addition the uncertainty related to the estimation of parameters in Monolix. 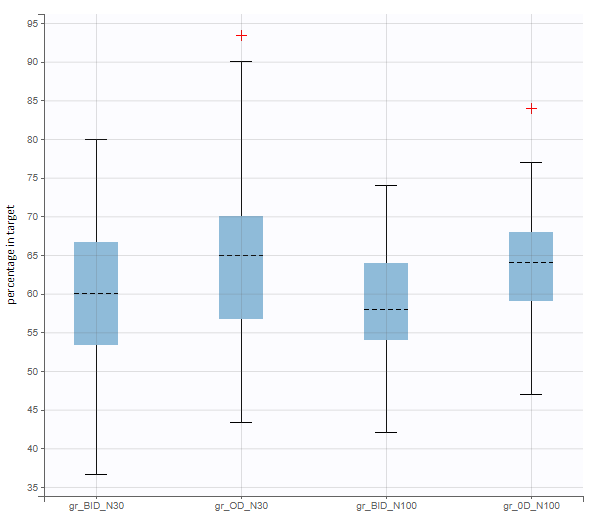