New possibilities, as well as unexpected and unwanted effects, arise during different phases of drugs development. Simulx allows to create a new project from scratch, which gives freedom in simulating new scenarios. Moreover, it creates easily a space for testing new hypothesis. This helps to explore the full potential of drugs, and better prepare for their possible failures.

To create a new project from scratch:

The following example shows how to build “from scratch” a simulation that aims at comparing different treatments among two populations: healthy volunteers and patients with rheumatoid arthritis. It uses a TMDD model for a ligand and receptor concentrations. In addition, the synthesis of the receptor depends on the population type – lower for healthy subjects. All simulation elements are user-defined. The basic assumption is that a  treatment is effective if the free receptor stays below 10% of the baseline. The goal is to test if the dose levels effective on healthy volunteers allow rheumatoid arthritis patients to reach the efficiency target.

When building a project from scratch, loading a model is mandatory and has to be done in the first place. It sets automatically the structure of a simulation based on the model type and its elements.

Covariates and their transformations are described in the [COVARIATE] block, the statistical model of the individual parameters is in the [INDIVIDUAL] block, while the [LONGITUDINAL] block contains the structural model with output definitions.

Definition of the scenario elements:

To guide building a project from scratch, Simulx defines default simulation elements automatically using information from the loaded model. These elements can be removed or modified, as well as new elements can be created. In this example, the definition includes the following new elements used in the exploration and simulation.

The model assumes that rheumatoid arthritis disease affects the synthesis of the free receptor (ksyn parameter). It means that for a certain dose level the efficacy target can be reached by healthy individuals (ksyn_pop = 0.789, dashed reference curve in the figure below), but not by patients with rheumatoid arthritis (ksyn_pop = 2.8, solid curve). In this exploration, the scaling of the amount 3mg/kg corresponds to typical individual with a weight 70kg (blue frame). 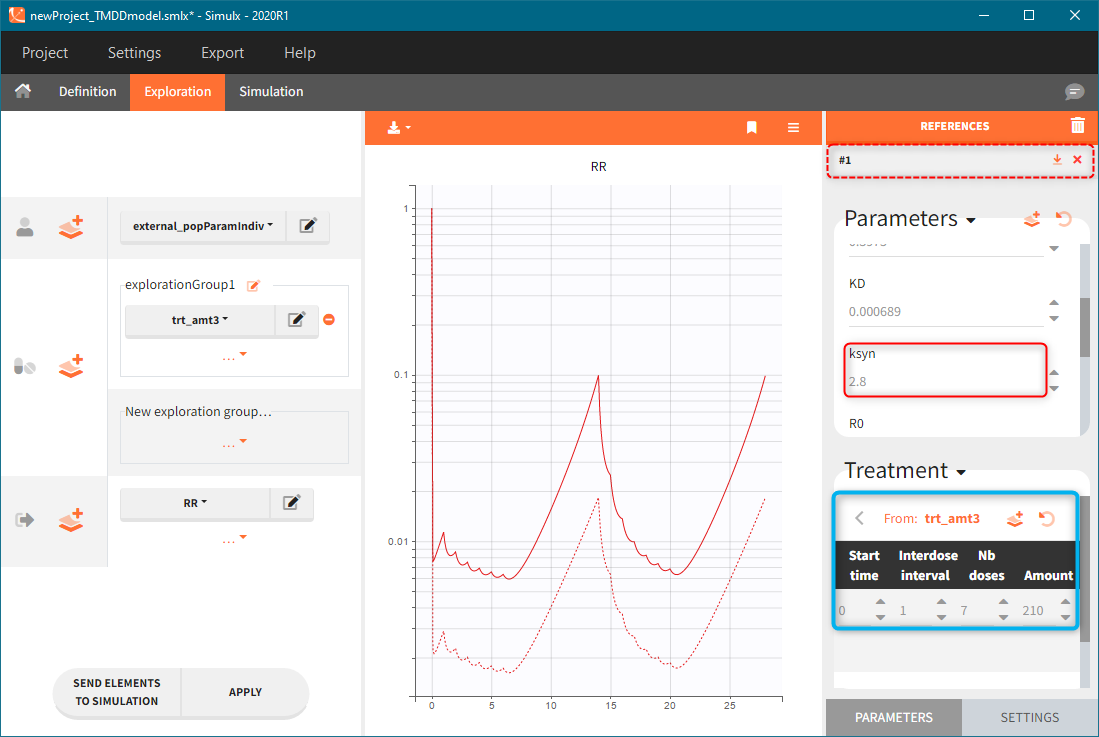 The scenario consists of 6 groups for three dose levels and two populations, see here to learn about creating a simulation scenario. 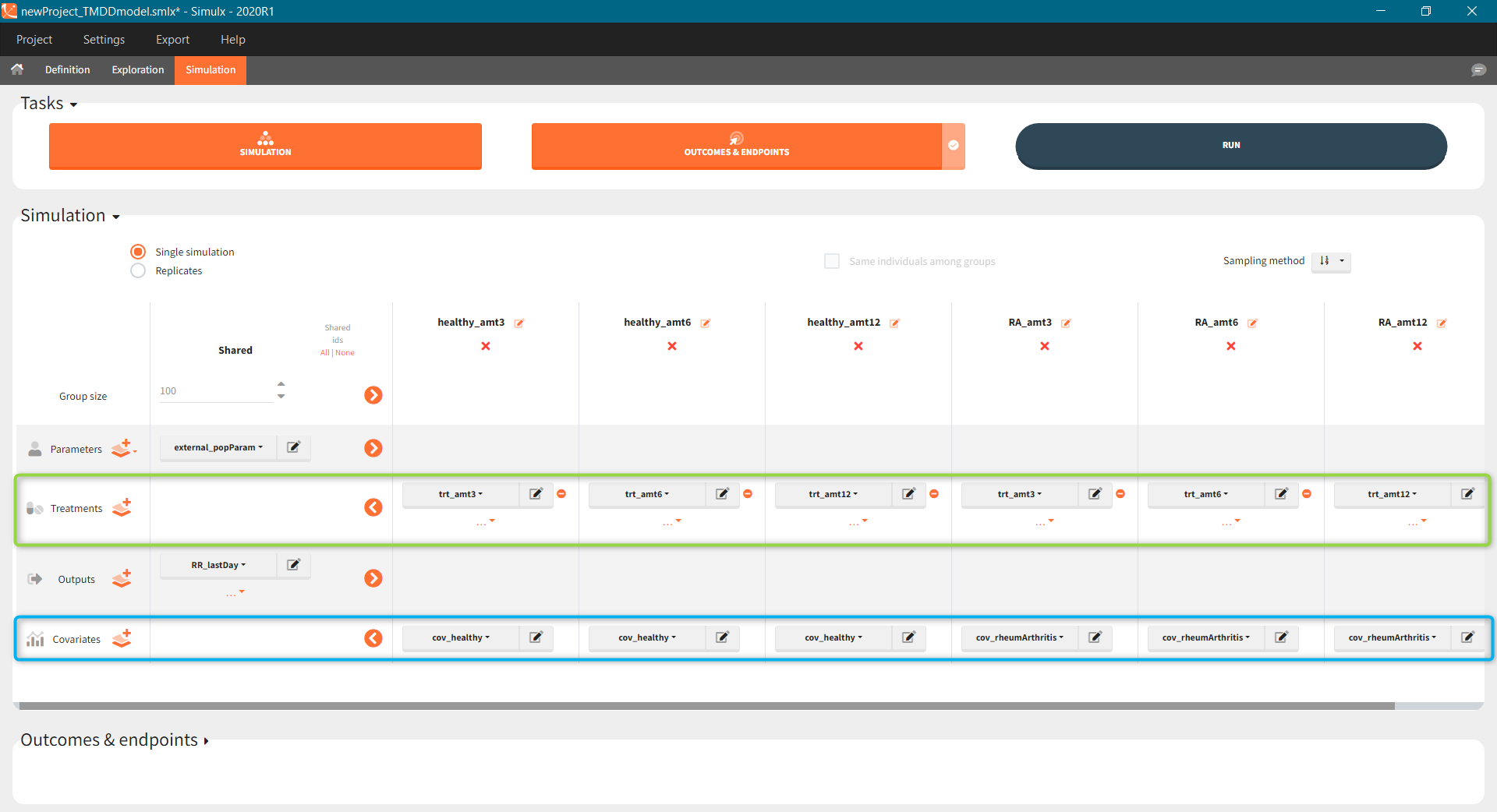 The outcomes&endpoints section defines post-processing of the simulation outputs for post-processing, which helps to compare the groups. The main endpoint is the percentage of individuals reaching the efficacy target in each group. It summarizes the “true” outcomes, which correspond to the situation when the ratio between the free receptor and the baseline at the end of the treatment is less then 10% (green frame). In addition, the “group comparison” (blue frame) compares the endpoints of all groups with respect to the reference group (healthy population with 3mg/kg dose level).

To run the simulation and the calculation of the endpoints it is enough to select both tasks and click the button “Run”. Generation of the results and plots is automatic in two dedicated tabs. The outcome distribution shows that the efficacy of the treatment in healthy individuals stays above 90% (red line) for all dose levels. On the contrary, a group with rheumatoid arthritis achieves this level only at the highest tested dose. 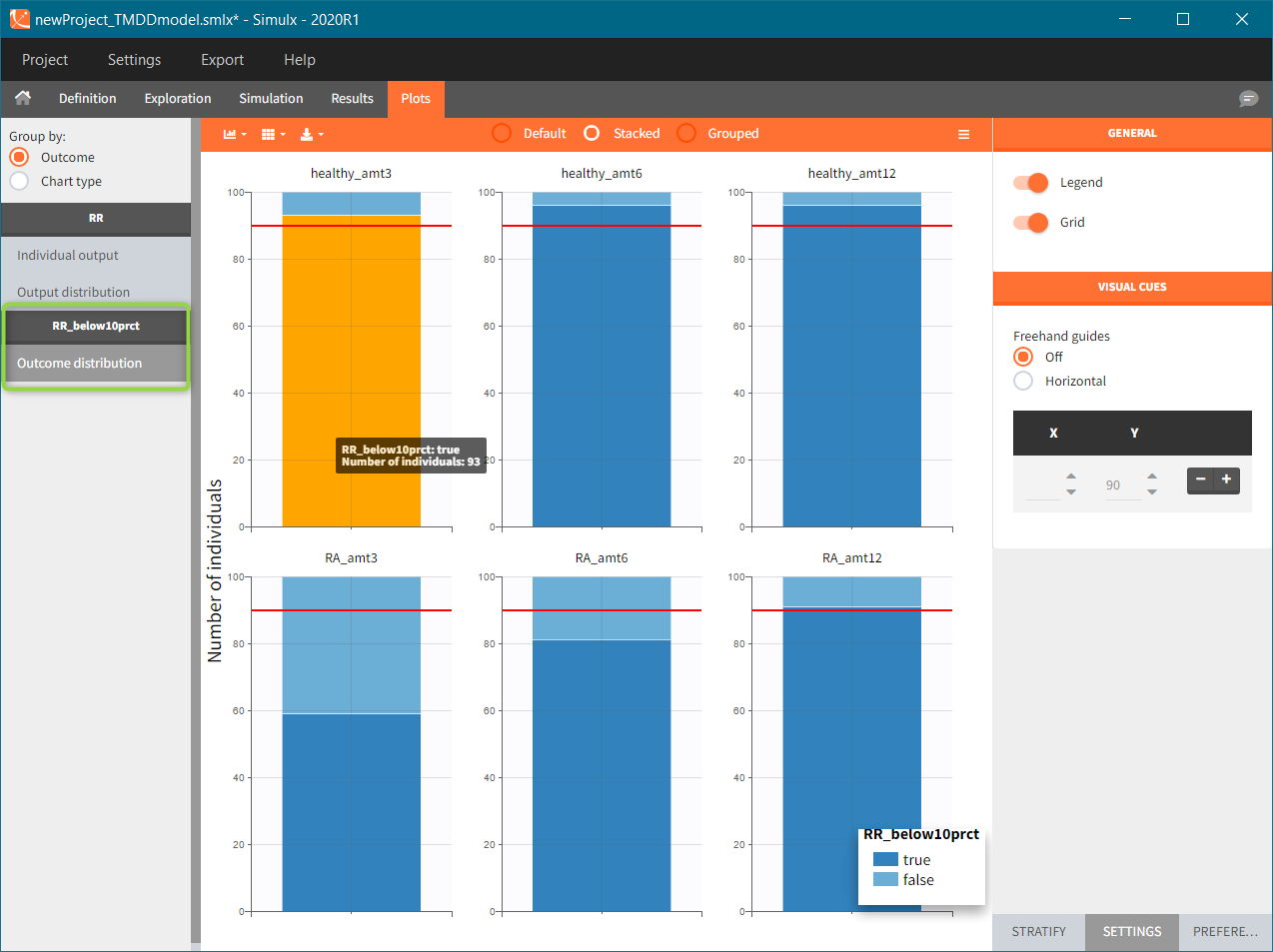 The response at the lowest dose level by healthy individuals is the reference. Group comparison considers a test group a “success” if the odds ratio of “percentage true” is larger then 0.6. Only the highest dose level satisfies this criterion for unhealthy patients. 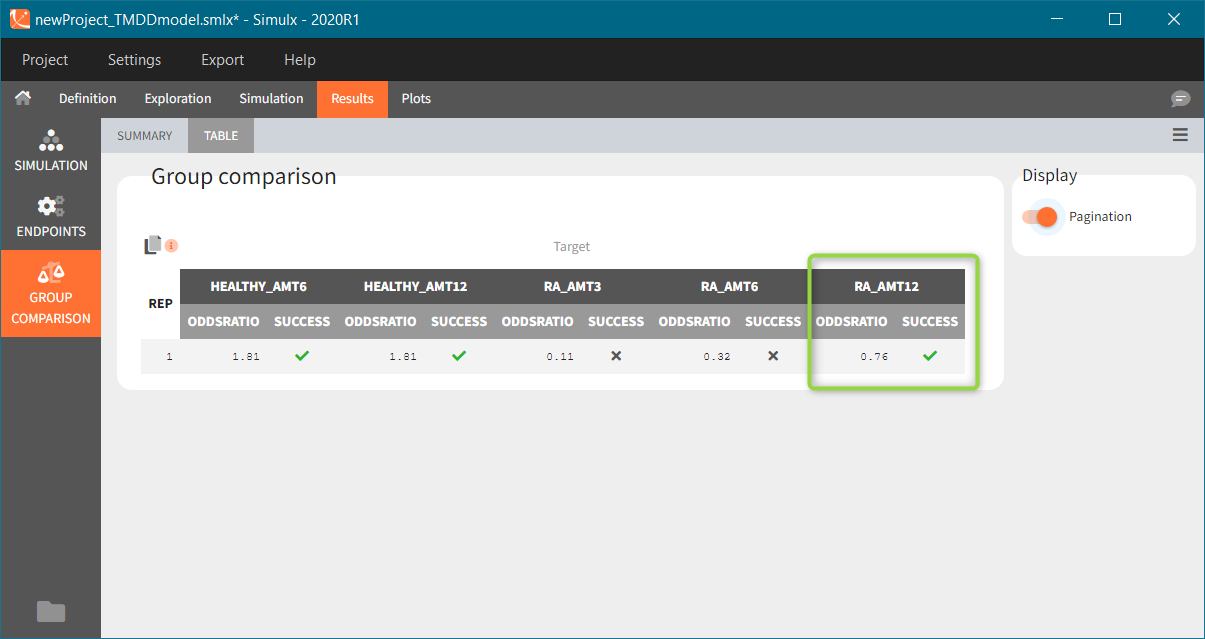