The Exploration tab is the second tab in the interface of Simulx. It simulates a typical individual to explore a model by interactively changing treatments and parameters.

In Exploration, the predictions are based on only:

These elements are selected in the left panel.

If a selected element is a table containing several sets of individual values, then the first row in the table is selected by default, and the “ID” field on top of the plot in the middle allows to select the row in the table corresponding to a particular ID.

This field is highlighted on the figure below, corresponding to a project that comes from a Monolix project imported into Simulx:

Thus changing the “ID” value will change the row read from the two tables mlx_EBEs and mlx_Adm1. 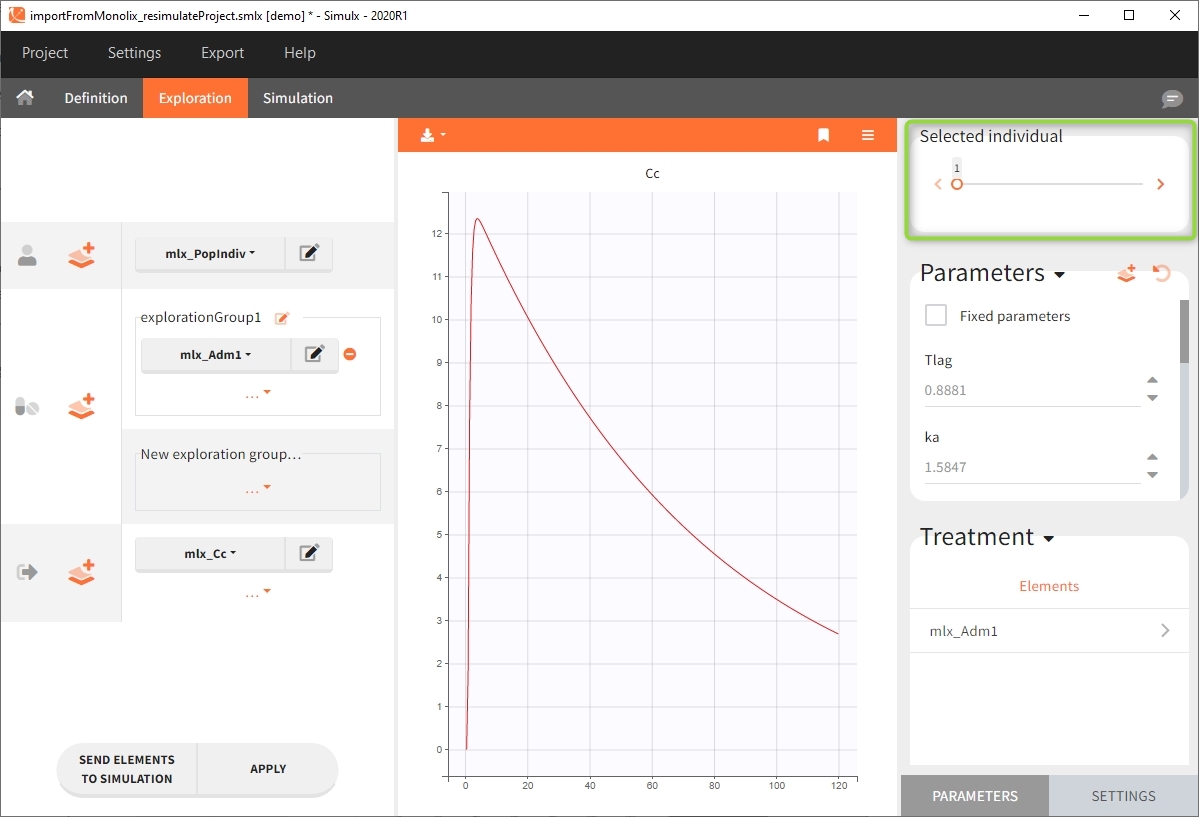 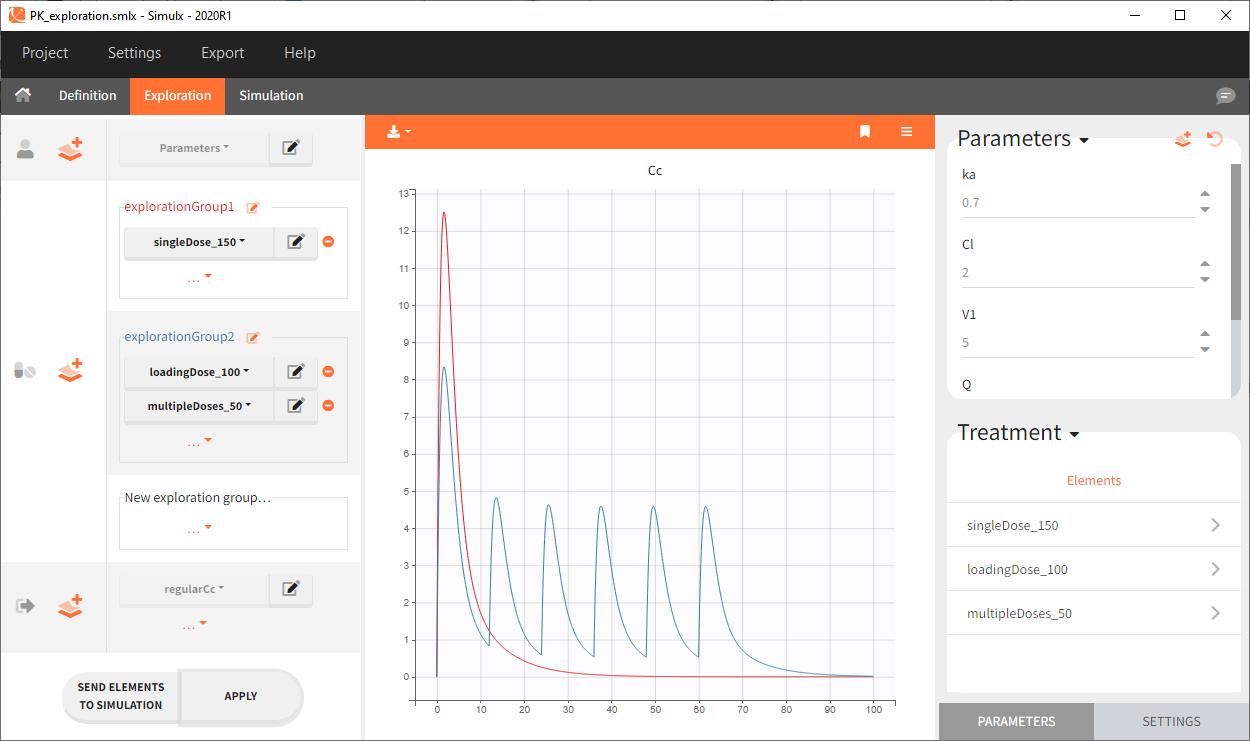 Only non-random element of type “Output” can be selected in Exploration, thus they should:

By default each output is plotted on a separate plot, as seen below. This can be changed in the exploration settings.

The right panel can be used to modify interactively the parameters values or the dosing regimens and check in real-time the impact on the model dynamics.

The figure below shows the parameter section highlighted in green, where the values can be changed via the small arrows or by entering new values with the keyboard. The “reset” button highlighted here in blue resets the parameters to their initial values. On the plot, the solid curves correspond to the current predictions, while reference curves has been added as dashed lines. 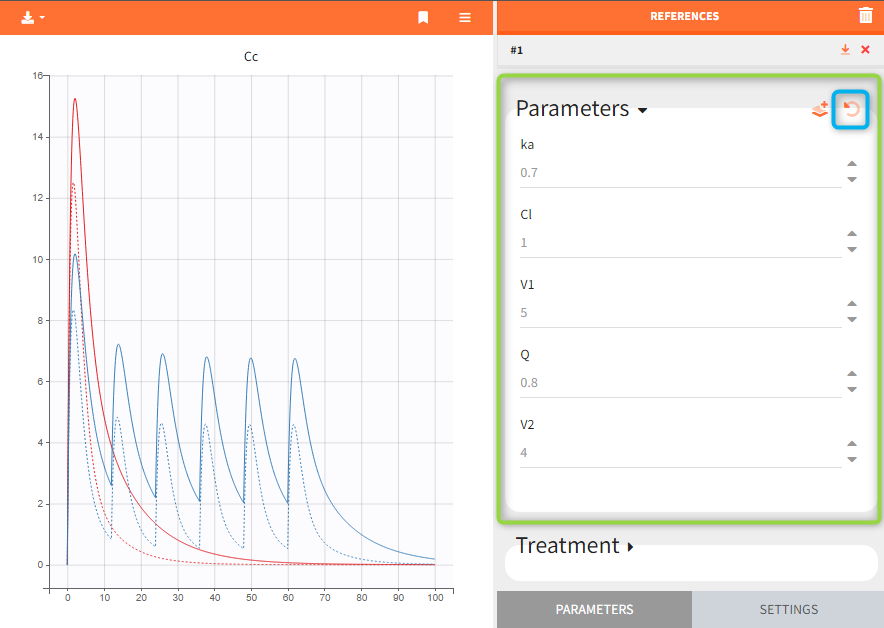 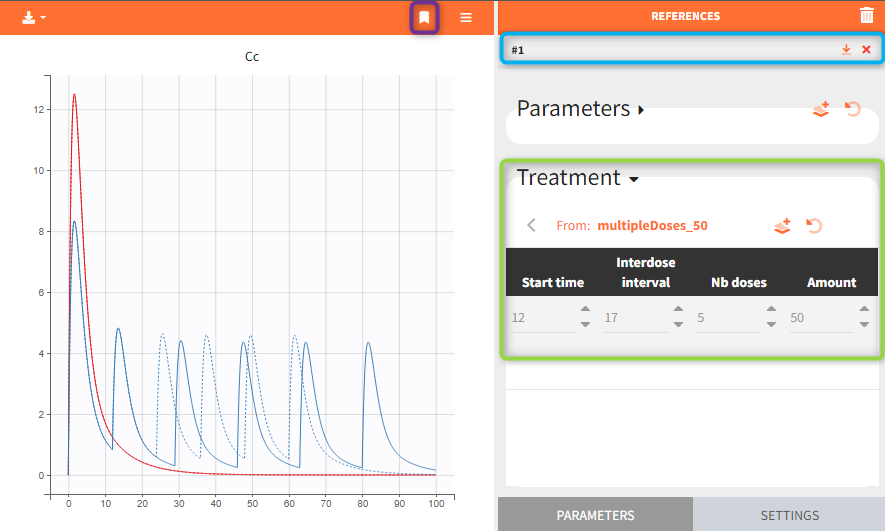 Moreover, hovering on a reference line highlights the corresponding reference on the plot in yellow, as seen on the following figure: 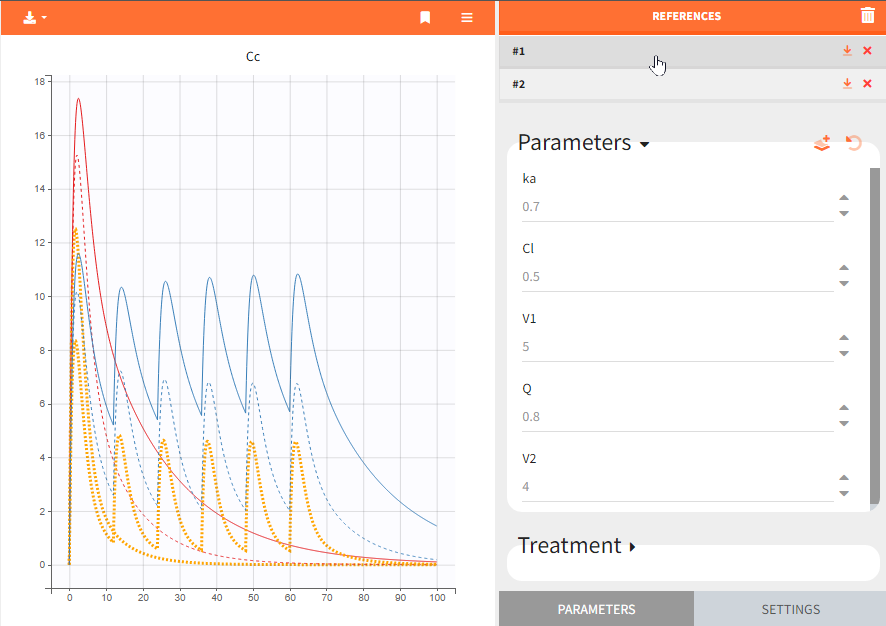 It is possible to save the modified parameters or treatments as new elements with the button marked as green on the figure below. It opens a window to create a new manual element of type Individual parameters or Treatment. A new parameter element created this way will automatically replace the previously selected element in Exploration, unless the corresponding checkbox is unchecked (blue mark on the figure). 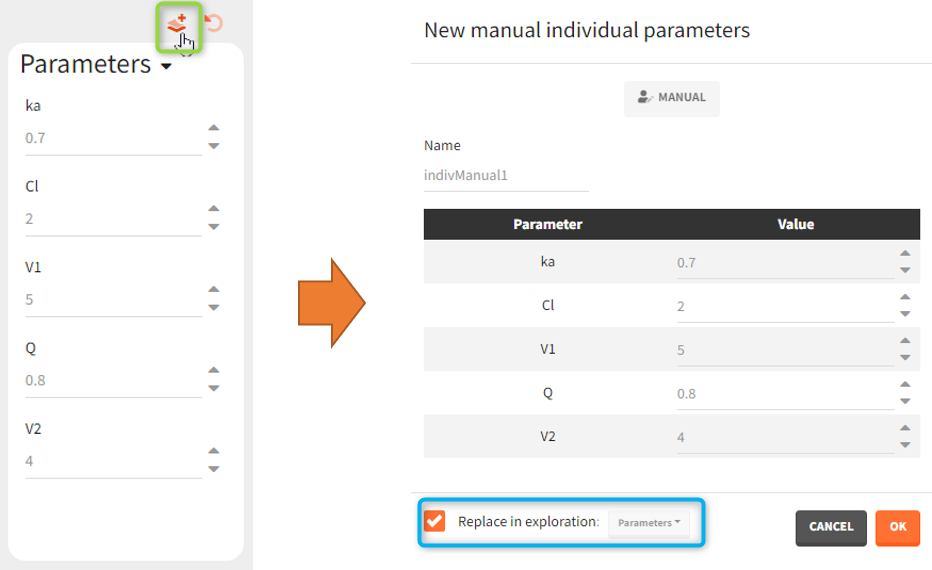 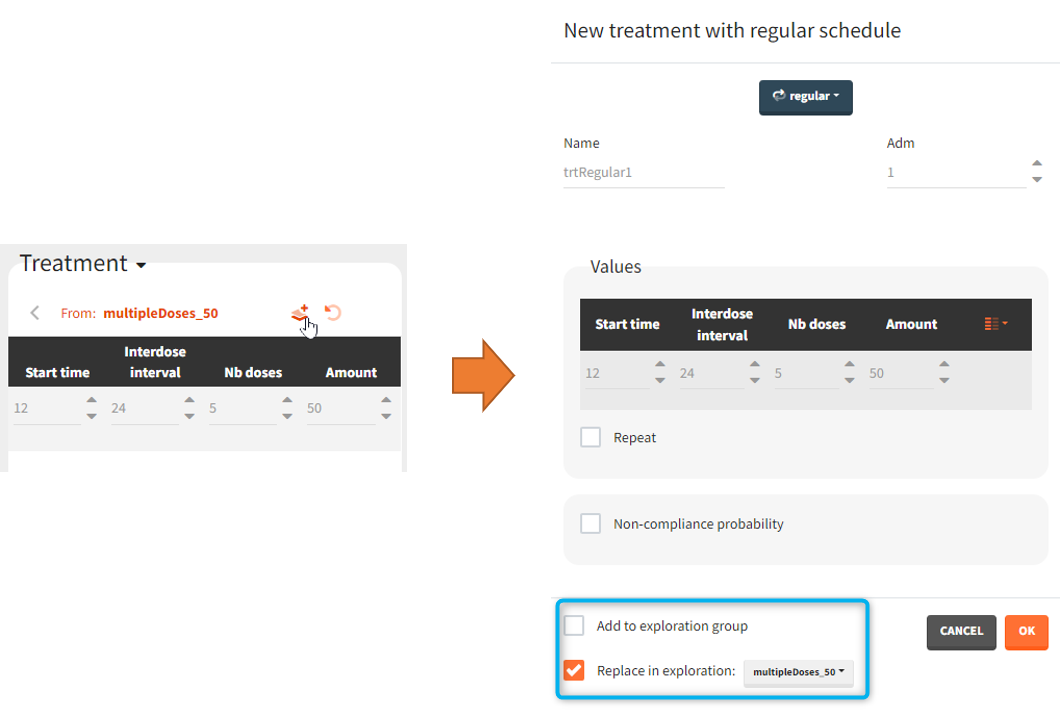 The panel “Settings” can be used to control some elements of the plots, such as the scale of the curves displayed on each plot.

On the following figure, two variables Cc and E are displayed on separate plots, with logscale on the Y-axis. 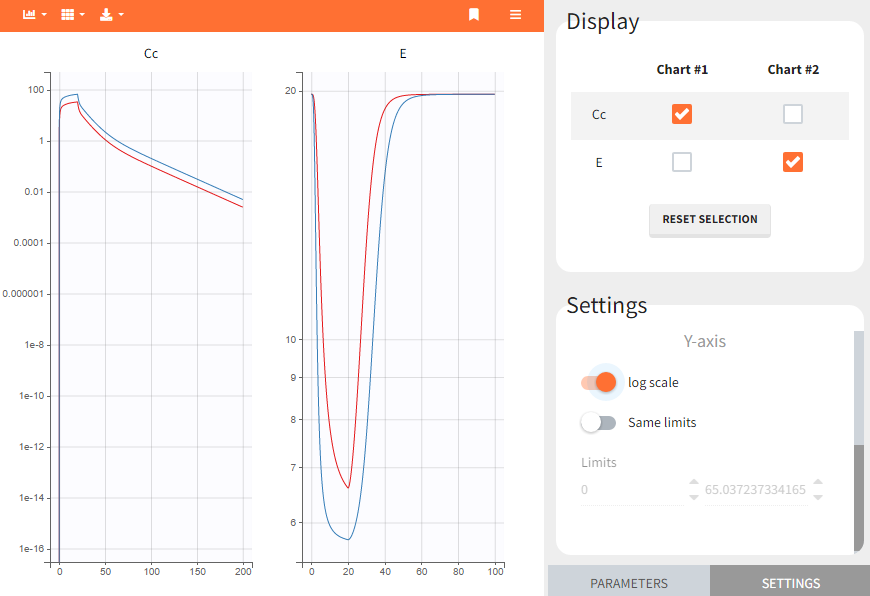 Below, the two variables are displayed on the same plot. Each variable keeps its own grid. 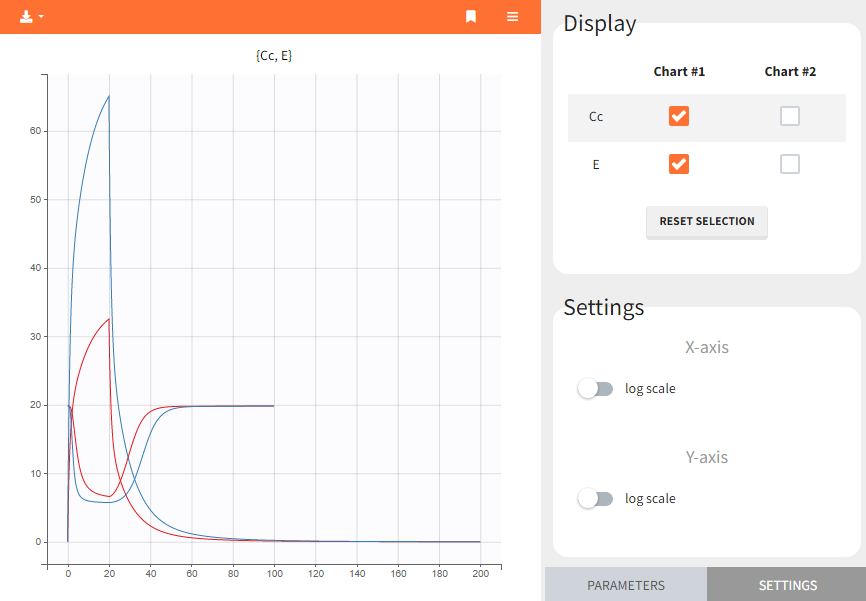 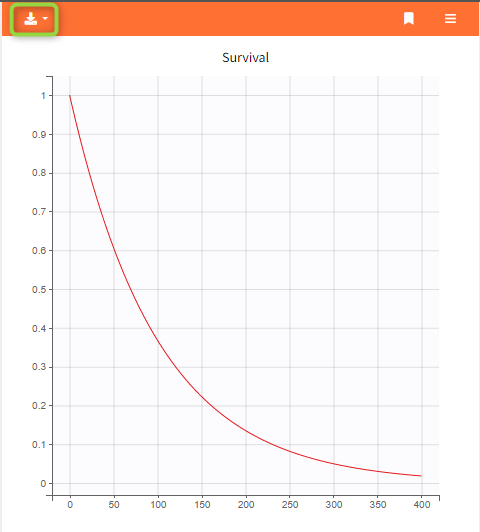 The “export” button on top of the plots can be used to save the plots as an image in the result folder. Two image formats are available: PNG and SVG (Scalable Vector Graphics).